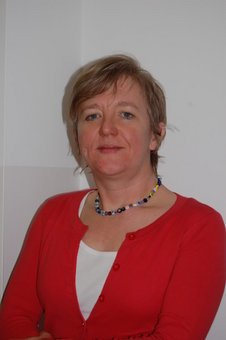 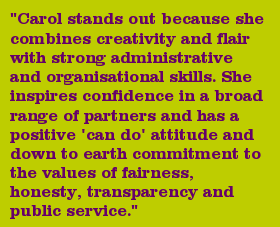 Combining creativity, flair and exceptional leadership and organisational skills, Carol Bell leads the successful delivery of NewcastleGateshead Initiatives £6m annual festival and event programme for Newcastle and Gateshead, and helps to showcase the work of key partners across North East England.  Achieving national and international recognition for her production work, Carol excels in inspiring confidence and has a down to earth commitment to fairness, honesty, transparency and public service.

Previously responsible for the programming and production of NewcastleGatesheads first Winter Festival in 2005, which involved a month-long residency by the French-based pyrotechnic company Group F,  Carol achieved national and international recognition in 2008 for the development and implementation of Picnopolis, a celebration of social activities held in public spaces in partnership with Japanese artist and architects.  Most recently, Carol led the winning bid for the UK School Games in 2010, which sees NewcastleGateshead hosting this major £2.5m event in the run up to the 2012 Olympic Games and was instrumental in delivering NewcastleGateshead Initiatives hugely successful Culture10 festival and events programme which culminates this March.