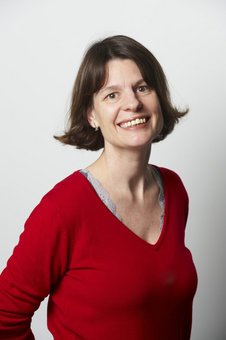 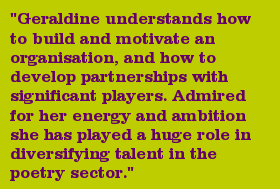 Geraldine has recently been appointed to a brand new role at the Royal Shakespeare Company, in which by creating imaginative opportunities and fresh perspectives she aims to develop new relationships with artists, audiences and communities.

Before joining the RSC in 2009, Geraldine was Director of Apples & Snakes where she built the company into a national performance poetry organisation with eighteen staff in seven English regions.

Geraldines inspiring energy created a unique organisation in Apples & Snakes, a leader in its field, elevating national recognition for new forms of poetry and inspired many young people through its education programme.

During her time at Apple & Snakes, Geraldine increased the funding streams, built effective partnerships between the poetry sector and theatre and art centres with, for example, a poet incubator series at BAC, Contact and the Birmingham Rep and established a commissioning and producing programme, which produced and toured the work of a number of spoken word artists including Zena Edwardss Security and Lemn Sissays Something Dark.   She also executive produced Speechless for Apples & Snakes and the British Council - a tour of five performance poets from South East Asia and four from the UK on the theme of freedom of expression.

She has created an exceptional organisation in Apples & Snakes and her appointment to the RSC is an affirmation of her leadership and success.