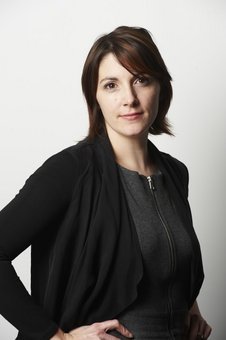 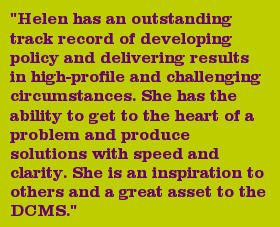 In 2005, Helen was one of the youngest women ever to be promoted to Deputy Director level at DCMS when she took up the role of Principal Private Secretary (PPS) for the then Secretary of State, Tessa Jowell.

Now as Deputy Director at DCMS, Helen plays a critical leadership role in delivering the Departments aims to improve the quality of life for all through cultural and sporting activities, to support the pursuit of excellence and to champion the media, creative and leisure industries.

Helen has worked in various roles in the DCMS since joining in February 2002 and in each role she has demonstrated the ability to work within central government to help ensure vibrant and successful cultural and creative sectors. Providing exceptional leadership in during her time as PPS the Department achieve a number of outstanding objectives such as a successful Olympic and Paralympic Bid, the delivery of a successful Charter Review for the BBC and the launch of the Creative Economy Programme.

Helen demonstrates integrity, reliability and openness in all her dealings, which has proven successful in influencing and negotiating with people inside and outside the Department.  She is passionate and committed to delivering the best results for the Department, and the cultural and creative sectors she works in.  Since January 2009 she has been a trustee of Target Ovarian Cancer, a new charity determined to improve the lot of women diagnosed with ovarian cancer.