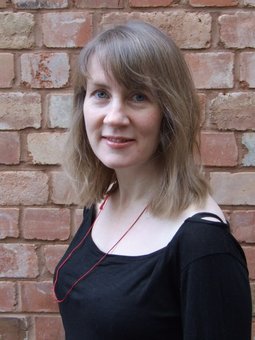 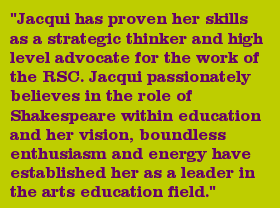 A practitioner and writer, Jacqui leads a team of 14 education practitioners and administrators as Director of Education at the Royal Shakespeare Company.

Previously a freelance theatre educator and actor she believes passionately in the role that Shakespeare and drama approaches can play in education. In 2008 she led the RSCs national campaign, Stand Up for Shakespeare, a manifesto for Shakespeare in schools. The manifestos aim is to ensure that more children and young people have access to high quality experiences of Shakespeare and 15,000 supporting signatures were obtained during the year long campaign.

She has excelled at driving through, both internally and externally, a new understanding of the role that the RSC and its approaches to the teaching of Shakespeare can play in improving the educational attainment of pupils and the status of teachers.  Along with members of her team, she has striven to influence the development of policy and practice around the teaching and learning of Shakespeare and brought about a major development for the RSC through establishing a programme of long term partnerships with school networks across the country.

During her time with the RSC in this post, Jacqui has proven her skills as a team leader, a strategic thinker and a high level advocate for the work of the RSC. She is committed to analysing the benefits of learning through Shakespeare based on proven evidence and has been instrumental in ensuring the development of this evidence base at the RSC.