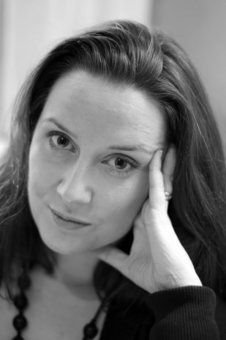 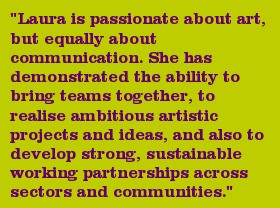 Lauras leadership of FACTs artistic programme has seen the organisation grow across the last five years into an art-led think tank where exhibitions, projects, commissions and education projects tackle the big questions of our time: What is the future of the human? Are we sustainable? Do we believe in Progress? Her philosophy is that if artists are the producers of knowledge, then arts organisations are catalysts for debate and discussion.

Laura has a unique talent in creating strong, sustainable working relationships across sectors and communities both locally and internationally. Lauras interest in public engagement developed while leading Tate Liverpools Public Programme from 2003 and later FACTs Collaboration Programme. She has recently steered the internationally renowned community internet TV project tenantspin to a new lease of life as it celebrated its tenth anniversary and received new funding from the Paul Hamlyn Foundation.

At FACT, Laura has ensured that every major project since 2008 has been developed collaboratively with an international co-producer and FACT commissions have recently travelled to Beijing, Brisbane, Rotterdam, Luxembourg and Paris. And her leadership can be seen in establishing ambitious artistic projects such as FACTs European Capital of Culture programme Human Futures, the inaugural international festival Abandon Normal Devices and major Cultural Olympiad commissions. She has developed acclaimed projects with high-profile artists at FACT such as Pipilotti Rist, Apichatpong Weerasethakul, Krystof Wodiczko, The Yes Men, Stelarch, Orlan and Ulf Langheinrich.

For four years, Laura has been by far the youngest member of LARC (Liverpool Arts and Regeneration Consortium) and her role in this group has been to lead on the relationship between art and health sectors.  Her contribution has lead to some remarkable results  2010 was named Liverpools Year of Well Being and has seen Liverpool Primary Care Trust invest in art and health projects across the city.

A founding member of the advisory board for the Liverpool John Moores Art and Design Academy which launched the £24.1m centre in 2008 Laura was awarded an Honorary Senior Research Fellowship for her ongoing work with the University of Liverpool developing research programmes and publishing.

Laura believes there are new types of leadership required for the 21st Century.  For her they are about facilitating the talents of individuals, connecting people and building peoples capacity so that people can contribute to, co-produce and make the vision you are working to happen.