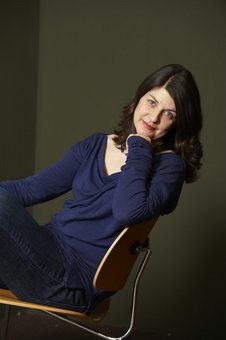 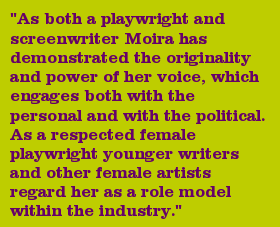 A freelance playwright and screenwriter, Moira is the Writer-in-Residence at the National Theatre for 2010.  Moira has written eight original full length plays, a catalogue of theatre adaptations and several film scripts.  Her work had demonstrated the originality and power of her voice, the understanding and control of her craft and the ability to infuse her work with moral vision that engages both with the personal and with the political.

Moiras involvement with Monsterists, as a founding member of this group of playwrights who campaigned to regenerate ambitious writing for large scale space, demonstrates her commitment to a shared and ambitious ethos.  Her engagement with the National Theatre and its Studio as Writer-in-Residence shows her desire to share her knowledge and insights with both new and emerging talent with the established artistic management of a major institution.

Known for her tenacity and commitment to principle of allowing female artists a strong voice in cultural landscape, fighting notions of pigeon-holing and demanding to be taken seriously at a human being first and as a woman second.