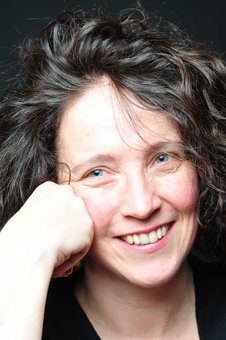 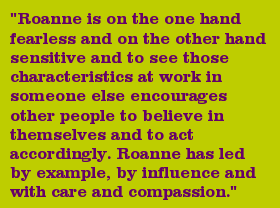 Roanne excelled in establishing the Jerwood Charitable Foundation (JCF) as an influential and significant funder of artists in the UK during her eleven year directorship.  Her leadership approach has always been to talk and to do, and always to imagine that you can, and imagine new ways of doing whatever that thing is.  She has inspired that approach and confidence in others and has made a career out of doing so.

What sets Roannes leadership apart is her belief in people.  The success achieved by the work of JCF was not measured in terms of what happened as a result of a funding grant but also by how it happened  the aim of the organisation, instilled by Roanne, was that its support should allow artists to thrive in their development primarily by maintaining the integrity of their vision and not through compromise.

With a profound skill of bringing people along on her journey, Roanne is adapt at helping other understand the correct instinct needed to make the right decision, especially when decisions need to be made outside their scope of experience.  This kind of leadership through influence is not easy and is often lonely.