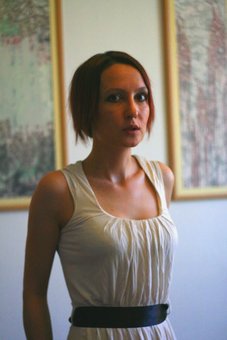 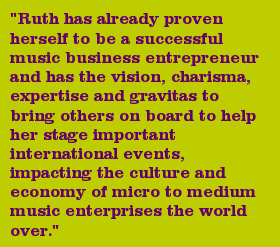 Under Ruths leadership and vision, Un-Convention, a global grassroots music event and community, has developed from a small gathering of independent and DIY music businesses in Salford to an international movement.  Un-Convention has staged events across the UK, as well as in Mumbai and Groningen and is undertaking forthcoming events in Colombia, Brazil, Australia, Belgium and Argentina.

Not just about the music business, Un-Convention is also a not-for-profit initiative that builds upon the opportunities available for independent and grassroots music community with the changes to the way music is produced, consumed and sustained in the 21st Century.

Ruths passion and commitment to the independent sector is shared by many, however she is the only person who has brought together a team and guided such a project.

While running the record label, Fat Northerner Records, Ruth has galvanised a diverse group of people from around the world as representatives on Un-Conventions Board. Her passion and leadership expertise are also utilised as board member of the Beating Wing Orchestra and The Creative Development Project.