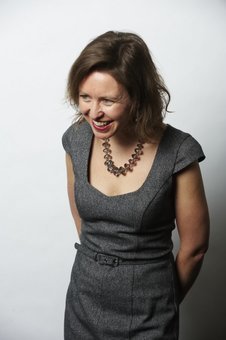 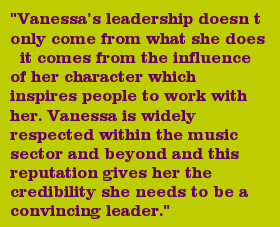 Over the past twelve years, Vanessa has made a lasting impact in the music sector and in other roles she has undertaken both in the UK and overseas. As Co-Director at PRS for Music Foundation, she has led the organisation into a new phase of development which has resulted in growth, new partnerships and increased benefits for the musicians and organisations the Foundation supports.

Joining PRSF in June 2008, Vanessa developed the first three year business plan for the Foundation and secured an enhanced three year funding agreement with the Foundations corporate donor, PRS For Music.  Vanessa is driven by a strong commitment to making a difference and works with partners to, ultimately have an impact on the cultural sector as a whole.  Talented at building new coalitions, including New Music Plus (a collaboration supported by the Cultural Leadership Programmes Meet The Challenge Fund), Vanessa is providing opportunities for the Foundation to work in a new way.

Vanessa creates momentum around the work and strategies she leads with dedication, insight, enthusiasm and a sense of humour.  Determined to succeed, she motivates others to join a shared goal and is working to break down barriers between new music and other art forms.  In her move to PRSF she has increased her focus and sense of authority as a leader and is applying her skills to a vision she can share with the team as the organisation celebrates its 10th anniversary.